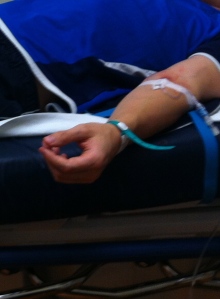 Last fall I wrote about my 26-year-old son who lost his right big toe in a freakish university gym accident a day after his student health insurance officially took effect. (See my blog post Young Invincible Health Insurance Saga 10-5-13). He had aged out of my university job-based health insurance three months before and, much to my consternation, had ‘gone bare,’ unable to afford any of the health insurance plans available to him at that time. He signed up for the University of Washington’s School Health Insurance Plan (SHIP) as soon as he started in a graduate program there. As I drove him to the (University-affiliated) emergency department with his (found) toe, and then as a wonderful physician cheerfully sewed it back on, I breathed a huge sigh of relief that his SHIP would at least cover most of the cost.

Although, on second thought, as I wrote then:

“Even though he officially has health insurance to cover his expensive ED visit (X-rays, sutures, IV Vancomycin, physician quips) and ortho follow-up, I do not trust it. There are pages upon pages of exclusions to his health insurance plan, including bungee-jumping and intercollegiate sports–neither of which would seem to apply to losing a toe in ballet/karate. But I know how crafty and devious health insurance companies can be in trying to deny medical claims. I would hope that the university where I am employed and teach (and where my son is now a student) would have a decent health insurance plan option for its students. I guess I’m about to find out.”

This was explained to me today by a nice young representative who answered the phone at LifeWise, the insurance company that underwrites and administers University of Washington’s SHIP. I called to ask (nicely) how it was that they could still legally include a pre-existing condition exclusion since ACA/Obamacare requires insurance companies to cover people with pre-existing conditions (including the ‘pre-exisiting condition’ of being a woman, for which insurance companies charged more). I had done my homework on this, reading the user-friendly Healthcare.gov website to find that there was one exception to this rule: the benignly named ‘grandfathered individual health insurance plans.’ I wanted to know how SHIP could possibly qualify for this ‘grandfatherly’ exception category, and if they did, why they didn’t include that statement clearly in their information brochure as mandated by the ACA. LifeWise has hassled my son to prove that his torn off toe wasn’t a pre-existing condition and has refused to pay for some of his other healthcare claims.

The LifeWise representative’s answer was that they weren’t a grandfathered plan, but that they didn’t have to follow many of the ACA mandates because ‘technically this isn’t a health insurance plan, it is a disability plan.’ Huh? She went on to explain that the fine-print ‘Note’ clause on the front page of their consumer brochure ‘clearly states this.’ I had the brochure on the screen in front of me and sure enough, right under the large purple banner/title “University of Washington/ Seattle ‘SHIP’ Student Health Insurance Plan” it has a teeny tiny “Note:This coverage is blanket disability insurance. Coverage provided is “excess” only and does not contain a “coordination of benefits” provision.”

That is so (not) clear and transparent for any self-respecting university-attending Young Invinsible, not to mention their University Professor parent who, oh I don’t know, perhaps has a doctorate in health policy? Now I happen to have both ‘real’ health insurance and ‘real’ disability insurance through my university job and I know the difference between them.When I asked the LifeWise representative to please explain how SHIP was really S-DIP I suppose, she replied that she really couldn’t explain it: “of the hundreds of different insurance plans I deal with, this is a unique policy.”

Unique indeed. How can a university (‘my’ university no less) offer what it clearly labels ‘student health insurance’ when it isn’t really health insurance and therefore doesn’t have to comply with current ACA mandates? What will it take for our country to get a saner health care system?

14 thoughts on “My Young Invincible, His Lost and Found Toe, and University Health Insurance That ‘Technically Isn’t’”

Featured book: Skid Road: On the Frontier of Health and Homelessness in Seattle, January 2023