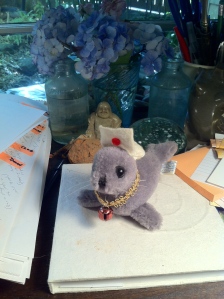 Radical nurses are back, or perhaps they never left and are just becoming more visible, more organized. The photo here is of my nurse’s cap-wearing trained seal mascot given to me by a friend in nursing school–who promptly dropped out of school because she was too radical for them.

There is the Radical Nurse on Facebook (aka Rebekah Dubrosky, RN) who says of herself, “Radical nurse goes to graduate school with hopes of starting a nursing revolution!” Her profile photo is of the formidable radical nurse and mother of public health nursing, Lillian Wald. Ms. Dubrosky is a doctoral student in the College of Nursing at the University of Wisconsin/Milwaukee. She just published a very good article “Iris Young’s Five Faces of Oppression Applied to Nursing” (Nursing Forum vol 48(3):205-210, July/Sept 2013).

There is the newly-formed Rebellious Nursing! group, which had its first national conference this past fall in Philadelphia. They state: “We believe that Nursing is an inherently political profession and that all nurses are rebellious.” I’m not sure I agree with their tag line, but I do love their logo of a white nurse’s cap going up in flames. An extension of the bra-burning second wave feminists and the corset-burning first-wave feminists. The third-wave feminists seem to have nothing left to burn so they’re putting the push-up bras and corsets back on. (Just kidding. Don’t burn me all you wonderful third-wave feminists–including my former nursing student who introduced me to Rebellious Nursing!).

Going back to the second-wave feminists, there was Casandra: Radical Feminist Nurses Network from the 1980’s. Some of their old newsletters are on Peggy Chinn’s blog, NurseManifest. Peggy Chinn, RN, PhD, is Professor Emerita, University of Connecticut, but she will never truly retire.

There were also Radical Nurse Groups (RNGs) active in the 1980’s within the UK. A nurse blogger who goes by the pseudonym Grumbling Appendix (gotta love British humor) and who works in an NHS hospital (hence the need for a pseudonym), is now archiving material for the RNG’s. In the recent post in the New Left forum, Grumbling Appendix makes the observation that some things have not changed much. I love the Radical Nurses Archive: So….Just How Radical Are You? It includes a funny-sad multiple-choice test from 1982 (when I graduated from wretched nursing school wearing a wretched nurse’s cap), although I need a Brit to help interpret the final scoring scheme.

For an amazing blast from the past that is also sobering in terms of how little things have changed, take a look at the 20 minute film The Politics of Caring from 1977 (produced, directed, and edited by Joan Finck and Timothy Sawyer in collaboration with Karen Wolf, RN.) It is posted on Peggy Chinn’s NurseManifest blog. The only difference between then and now that I see is that the nurses then were still wearing white nurse’s caps (non-flaming) and white dress uniforms (and oh my! those disgusting thick white opaque pantyhose that kept the oh my! pubic hairs from dropping off onto the operating room floor!) There’s something about ‘radical’ and the use of exclamation points….

In the film they begin by saying that while nurses are the largest component of the healthcare workforce they have the least say in health policy. Familiar? They discuss the disconnect between what is taught in nursing school about providing quality of care, and the reality of what is possible within the practice environment. (I hear this from my students all the time). They also question whether nursing can even be called a profession when the majority of nurses don’t have control over their work environments. And they discuss the tensions within nursing with the then newly-emerging role of advance practice nurses/nurse practitioners, pointing out (somewhat rightly so) that these ‘new nurses’ were mainly working within the medical model of care.

As a community health nurse I was fascinated to hear the nurses in the film talk about “the mecca of community nursing” as a place where nurses could practice ‘real nursing’ focusing on health prevention and promotion within the nursing model of care. Community health is what attracted me to nursing in the first place and it continues to be what I love most about my work. But we need hospital nurses and there are nurses who love working in hospitals and don’t want to have to ‘trade up’ to community health, or to become a nurse practitioner or a nursing professor in order to have greater control over their working conditions. Besides unions and Radical Nursing! groups, what is there for them?