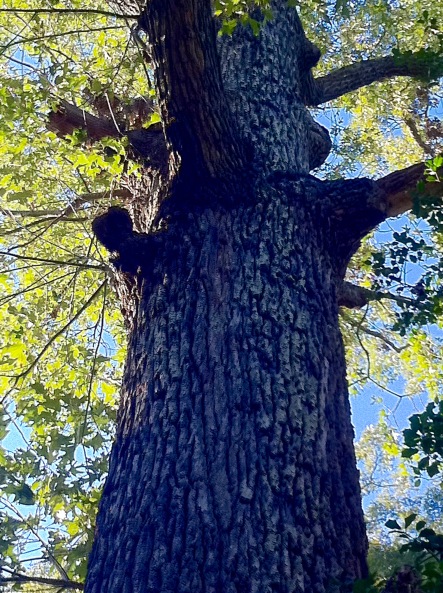 Poet, dramatist, psychotherapist, and anti-oppression trainer Leticia Nieto, who teaches at Saint Martin’s University near Olympia, Washington, uses a photograph of a tree to represent core power, grounding, and personhood, as she puts it “who we really are when all the layers of rigid roles are stripped away.” The photograph she uses is of a leafless tree with gnarled limbs and trunk in the distinct shape of a human body.

I had the good fortune of attending her workshop titled “Social Justice Through Interpersonal Liberation: Strategic Interventions for Anti-Oppression” at Seattle University’s wonderful Search for Meaning Book Festival at the end of February. I’ve subsequently bought and read her book (with co-authors Margot F. Boyer, Liz Goodwin, Garth R. Johnson, and Laurel Collier Smith), Beyond Inclusion, Beyond Empowerment: A Developmental Strategy to Liberate Everyone (Olympia, WA: Cuetzpalin Publishing). Although it has a fairly heady and pie-in-the-sky subtitle, it is an excellent book. I’ve worked my way through the book, revisited my notes from her workshop, and thought about what it all means for me. I’ve also spent time searching for my own photograph of a tree that represents my own life, grounding, personhood. I considered using a photo I took in New Zealand of the grand Tane Mahuta, an old growth giant kauri tree on the North Island that is upwards of 2,500 years old. That was when I was feeling a bit grandiose. As much as I love that tree and New Zealand, those are not my roots.

My roots, my ‘personhood’ tree is this old Black Oak tree still growing in the leafy green woods of Camp Hanover, my childhood home. This particular oak tree is growing beside on old family graveyard–a family I am not related to as far as I know. The roots of this tree are in complex territory, territory I am still wrestling with in terms of my own social justice and anti-oppression work. Here are a few excerpts from the chapter “First Families” in my forthcoming medical memoir, Catching Homelessness: A Nurse’s Story of Falling Through the Safety Net (Berkeley: She Writes Press, August 2016)–excerpts that describe some of this territory:

“The land I grew up on near Cold Harbor [Virginia] had been the site of the bloodiest battles in the Civil War. The two battles were two years apart; soldiers on both sides in the last battle unearthed decomposing bodies from the previous battle as they dug trenches. Our land was strewn with Civil War bullets, musket balls, deep earthworks, and mounded graves. Long before, the Pamunkey Indians had scattered the land with white quartz arrowheads.(…) [There was] as family burial site. leaf-strewn mounds of earth bumped together in a line like the cedar logs on the corduroy road. The site was on a bluff overlooking a ravine cascading down to a small stream. Most of the graves had carved gray headstones: Robert Anderson born March 10, 1792, died July 26, 1853: William Nelson Anderson born February 16, 1837, died May 15, 1851; and, Nancy Peasley Anderson born April 18, 1833, died July 15, 1834. Nancy’s grave was short, but there was an even shorter grave next to it of another Nancy, “infant granddaughter” Nancy Julia Elizabeth with no dates given. A few feet away were six or so unmarked graves, which my mother said were those of Negro slaves. These couldn’t have been content, but I didn’t see their ghosts back then. It was as if they had never existed.”