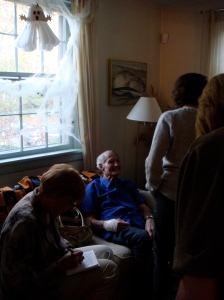 I’m sitting in a red velvet pew in my father‘s church. It is cold as a morgue in here. As Pachalbel is played on the huge organ in the back of the church, I notice my father’s hand shaking as he holds the open hymnal. He starts hospice tomorrow, or at least they are coming to his home to do an intake assessment. Today we have a Halloween party at his house–a living wake as he calls it, but I can tell he is looking forward to seeing a lot of old friends again.

Two days ago when he found out about hospice, he fired me. At dinnertime he went on a hunger strike and the leftover Chinese food on his plate congealed and went cold. He refused to talk to me for awhile, except to tell me “I’ve never felt so out of control in my life.” Then he felt better and ate his food.

We sang “A Mighty Fortress” and my father needed help holding the big blue hymnal. His right hand is bandaged from a recent fall. A week ago I took my father to see his family doctor whose office is in a cornfield on the edge of the Cold Harbor Civil War battlefield. My father has gone to that same office for the past 50 years, and has had at least 2 doctors there retire on him. He’s had this younger doctor for the past 10 or so years.

While we waited in the exam room I went over four questions with my father–more detailed questions for his Living Will. He readily knew his answers to 3 out of 4 of the questions, but the one on restarting his heart if it stopped stumped him. He asked me for my opinion and I felt uncomfortable, so I advised him to talk with his doctor about that. After his doctor has checked his hand wound, I reminded my father about the resuscitation question. His doctor first told my father that he was “way ahead of most people in thinking about these questions and planning it out.” Then he said, “I’ve known you long enough that I know your answer to that question is ‘no.'”  I’m not sure how I feel about that conversation and how it went. I probably wouldn’t have been so directive and forceful with any of my patients, but at the same time my father did appreciate his frankness.