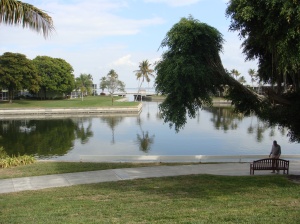 Yesterday I visited the largest continuing care retirement community (CCRC) in Florida, and therefore, probably the largest in the world. Shell Point has over 2,000 residents in various stages of the continuing care housing options, which range from individual houses to a 200-bed nursing home. They have over 900 employees. My father wanted to visit two friends of his who are in the nursing home. As I waited in the lobby there were seven residents in wheelchairs and with walkers lined up in front of a TV. Some looked towards the TV but most held their heads in the their hands or stared at the floor. There was piped in music of church hymns, interrupted occasionally by ads for the benefits of joining Shell Point. There were more mobile residents dressed in light blue shirts who volunteer at the nursing home to “ensure that this time of life is handled smoothly and professionally,” as their website states. 18-hole championship golf course! Free Boat dockage! For life!—also according to their website. There was a fleet of electric cars taking people around the sprawling gated community. It had an eerie Brave New World feel to it.

According to the NYT, there are 1,900 of these “aging in place” operations in the US, housing over 900,000 elderly people. Florida has 73 licensed CCRCs housing 30,000 residents and is a $1.4 billion industry in the state. With an average entrance fee of $250,000, they are a form of insurance for pre-paid care. You stay there until you die. I didn’t see a funeral home, but there must be one on their campus.

I hope I was not seeing my future yesterday at Shell Point. Being on the tail-end of the 79 million baby boomers—the oldest of which just started turning 65 this month—I pay attention to these things. I suppose I am the pig’s tail of the “pig in the python” large boomer cohort, and as the NYT aptly points out, we are working our way through the python’s digestive tract. “The final stage of the pig in the python—retirement, old age, then a release to a place where the celestial Muzak plays a never-ending loop of the Doobie Brothers” (NYT: “Boomers hit new self-absorption milestone: Age 65”).

I see the attraction of the CCRCs. As a caretaker daughter right now facing getting my father in a wheelchair through airports and back home to his maze of support for keeping him in his own home through his final illness—I definitely see the attraction of the CCRCs. While I’m glad to do this for my father, it is a lot of work and worry, especially living and working across the country from him. I don’t want to burden my own son when my time comes, but I hope there is enough meaningful health care/elder care reform by then that I don’t have to end up at Shell Point with the hymnal Muzak.