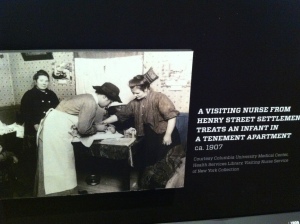 Earlier this month I was in NYC and stumbled upon an amazing exhibit “Activist New York” at the Museum of the City of New York (runs through the end of the summer). In between the Quakers and Gay Bob (the world’s first gay doll), was an entire section on Lillian Wald and the Henry Street Settlement. The overview placard reads:

“In 1893, two young nurses, Lillian D. Wald and Mary Brewster moved into a Lower East Side apartment to offer medical services to poor immigrants living in tenements nearby. Out of their initial effort grew two institutions, the Henry Street Settlement and its public nursing service, which later became the Visiting Nurse Service of New York. When Wald moved into 265 Henry Street in 1895, the city had a handful of settlement houses; by 1911 it would have at least 70. Wald became one of the nation’s most recognized social activists. Her urban nursing service helped create the field of public health nursing. Henry Street became a nerve center for causes ranging from labor arbitration to the abolition of child labor to racial integration and world disarmament (…) The activism of New York City’s settlement workers and visiting nurses thus helped to define social welfare and urban liberalism in 20th century America.”

I read this with great pride and wanted to jump up and down and tell everyone in the (quiet—it is a museum) room to come look at what nurses had done. Then I spied a strange arrangement of items in a glass-enclosed case, beside a life-sized statue of Lillian Wald. I looked closer and it was the (dreaded to me!) black leather bag of the public health nurse and a wooden collapsible flyswatter with Metropolitan Life Insurance written on it. The black bag I knew well from my own clinical rotation in public health nursing in a previous century. But a fly swatter?

Turns out that Lillian Wald formed a partnership with the Metropolitan Life Insurance Company, whereby they contracted with her visiting nurses to care for ailing policy holders in their homes—and the Metropolitan Life Insurance Company had a huge public health campaign against flies/contagion and tuberculosis and the visiting nurses gave out free fly swatters wherever they went.

Somehow this part of the story started to make me feel unsettled and I wondered if Lillian was a sell out to corporate America….

Still, I highly recommend this exhibit if you are in NYC this summer. Where else in the world can you find early Quakers and public health nurses and Gay Bob dolls all in one room?

One thought on “Of Flyswatters and Public Health Nursing”