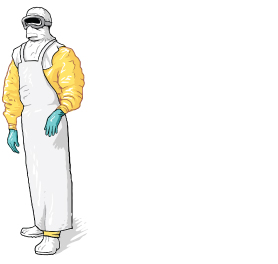 Until very recently in the United States the general feeling among most people (and among most news reports) was that the catastrophic Ebola epidemic was only a problem ‘over there in the poorest countries of Africa–all of those uneducated Africans who can’t even keep their food from getting contaminated by bat droppings.’ This summer, we were happily dousing ourselves with buckets of ice water in the (dare I say ‘silly and oh so contagious social media’ hype) of the ALS Ice Bucket Challenge. (see my previous blog post: ‘Ice Bucket Challenge for Ebola‘ 8-26-14 for additional perspective on this in light of the global health burden of disease.) At the time that I wrote that blog post we had not yet had any patients tested/confirmed with Ebola in our country. Now, of course, we have multiple confirmed cases in the U.S., including two young nurses who had cared for a patient with Ebola in a Dallas, Texas hospital.

This morning in my community health nursing class of 150 students, I asked how many of them had had any training or preparation or discussion of Ebola in their clinical rotations. Only one student raised her hand and she said that was training through her job at a hospital (presumably Harborview Medical Center in Seattle which supposedly has done a good job of Ebola education and preparedness for its employees). The majority of students said they had been asked by friends or family members for information on Ebola. I encouraged them all to read the excellent training materials for the general public and for health care providers on the CDC website–and to ask for preparedness training in their clinical sites. I also encouraged students to be attuned to subtle and not so subtle racism in news coverage and general conversations about Ebola. Even infographics about Ebola on the CDC website depict only impoverished rural African people with Ebola, in one case showing a man defecating on the ground.

The fact that it is two hospital nurses who are the first confirmed Ebola cases to be contracted in the U.S. should come as no surprise to anyone who knows and loves nurses or who has spent any time in a hospital. Nurses are the front-line, down-and-dirty direct patient care providers. These two nurses were following current (at the time–they have been updated today) Ebola infection control procedures. And whereas the latest nurse with confirmed Ebola, Amber Joy Vinson, was first reported as having breached CDC protocol and flown on a commercial plane while she had a fever, CDC officials are now confirming that she first phoned them when she had a fever and was due to fly: “I don’t think we actually said she could fly, but we didn’t tell her she couldn’t fly,” CDC director Dr. Thomas R. Freiden is quoted as saying. “She called us, (…) I really think this one is on us.” (NYT ‘New Ebola Case Confirmed, U.S. Vows Vigilance’ by Manny Fernandez and Jack Healy, 10-15-14.)

It is always ironic that it takes ‘big scary disease’ epidemics like Ebola to remind us all of: 1) how connected we are to everyone else in the world–their problems are literally our problem, 2) the importance of sustaining a robust public health infrastructure, and 3) how vital nurses are to our health care system.

One thought on “Ebola: Not In My Backyard”