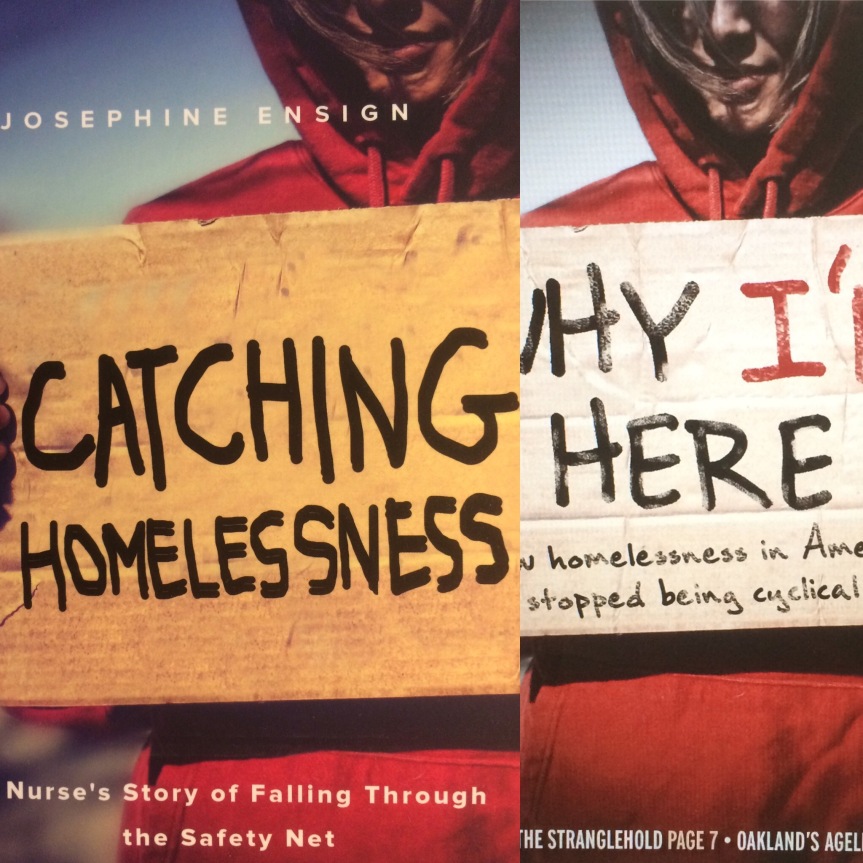 Double take. In the Age of Appropriation lines blur between reality and representation. That is what went through my head this week as I stared at the photograph from the cover of my medical memoir, Catching Homelessness: A Nurse’s Story of Falling Through the Safety Net (Berkeley: She Writes Press, August 9, 206) which was also on the cover of a recent edition of the SF Weekly (Vol. 35 no. 24, June 30-July 6, 2016). One of my favorite university librarians had been visiting her family in San Francisco over the 4th of July weekend and had seen “your face from your book’s cover photograph” and had wondered how they got it and how they could use it. Many people who know me and who have seen the cover of my memoir assume it is a photograph of a much younger me. To be clear, the photo is not of me: it is a stock photo taken of a young, white, blonde-haired woman posing as a homeless person.

The SF Weekly cover story for that week was titled “The Great Eliminator” by Chris Roberts (pp. 10-13), and was accompanied by yet another version of the cover photo, this time with the cardboard sign branded with “SF Homeless Project.” The article mainly focuses on the contemporary homelessness problem in the United States and specifically in San Francisco, and firmly places the blame on former President Reagan. Roberts ends his article by highlighting local efforts to allow police to clear tent encampments, and states, “Reagan, were he alive, would surely approve. He would definitely recognize the landscape. It’s just as he left it.” (p. 13)

Nothing new with that; just more of the same “blame Reagan—he caused all this mess” trope. I have no love for Reagan, but I also think it’s not at all helpful to keep scapegoating him. The contemporary homelessness problem is much more complex in terms of causation (and “fix-ation”) than any actions of one person or administration.

But what I find most disturbing about this edition of the SF Weekly is their use of this stock photograph of a young, attractive, scrubbed clean, white girl to represent the face of homelessness. Especially given the fact that the feature article has nothing to do with youth homelessness in the Bay Area—there is no context for this photograph. Unless you notice the magazine’s significant number of “Adult Services” advertisement pages, which begin with Dan Savage’s sex column “Savage Love.” According to the National Center for Missing and Exploited Children, one in five of the close to 12,000 “runaway” adolescents reported to them during 2015 was likely a victim of commercial sexual exploitation. And we know that when you add survival sex (trading sex for basic survival needs like food, clothing, and shelter) into the equation…well, let’s just say it is extraordinarily dangerous to be young and homeless and female (or transgender—sexual exploitation and violence also occurs for young men but at much lower rates).

The homeless cover girl in the red hoodie is not me, but she could have been me. For the cover of my medical memoir, I had hoped to use a photograph of one of my favorite collographs by my my late mother—an abstract picture of a ladder going up to a floating house (“Ladder to a Room Apart” 1984, Ruth Singley Ensign). To me it captured the essence of my story of spiraling into and climbing back out of chaos and homelessness. But my publisher nixed that idea and steered me towards this cover, that at least puts a (partial) face on homelessness. So there she is on the cover of my book and on the cover of the SF Weekly. She’s looking way too fresh-faced and scrubbed and manicured to “look homeless.” And donning a totally improbable and impractical bright red hoodie to look like a homeless version of Little Red Riding Hood minus the Big Bad Wolf. But posing homeless.

One thought on “The Homeless Cover Girl”