This past week I had the pleasure of chauffeuring and shadowing the political advocacy ‘great’ Nancy Amidei to the 2015 Housing and Homelessness Advocacy Day in Olympia, Washington–sponsored by the Washington Low Income Housing Coalition. There were 650 of us at the advocacy day, all wearing bright red polar fleece scarves (which were too hot on our unusually warm and sunny February day). This photo is of Nancy (on the left with ‘Housing Yes! $100 million for the Housing Trust Fund’ sign–next to a former student of hers). As part of the advocacy day morning ‘warm-up’ and information sessions, Nancy helped teach us her advocacy ‘bag of tricks’ in her highly engaging Advocacy 101 workshop.

Nancy Amidei is a local, regional, and national political advocacy/social justice treasure. She has been called “a relentless advocate for changing public policy to better serve the most vulnerable populations.” Earlier in her career she lived in Washington, DC and worked as a staff policy person on nutrition issues with the Department of Health and Human Services. She was part of a group that helped convince then President Ronald Regan that ketchup should not count as a vegetable in school lunches. Nancy is a can do, glass is most definitely half full type of person.

Nancy is a big part of why I decided to move across the country from Baltimore to Seattle. I first met her in 1994 when I interviewed at the University of Washington. Everyone who knew about my research and work with homeless youth told me I had to meet Nancy. At that time she was teaching policy and advocacy courses at the UW School of Social Work, and she coordinated the monthly meetings of the U-District-University Partnership for Youth.

Youth homelessness in the University District (adjacent to–well–really part of the University of Washington, Seattle campus) was–and still–is a very large and visible and politically contentious issue. Nancy managed to have people from across the social, political, ideological spectrum (and aisle) meet and work together to find common ground and solutions. At the first meeting she invited me to there were police officers, small business owners, university researchers, social service agency staff members, and many current and formerly homeless youth around one table at the UW School of Social Work. By the end of that meeting I was convinced that this city, this university job, the work of this amazing woman were for me!

Nancy always says ‘yes’ to my invitations for her to come talk to my nursing students about political advocacy. I use her excellent down-to-earth non-partisan book So You Want to Make a Difference in my graduate-level health politics and policy course. And for the past twenty years I have wanted to spend the day shadowing Nancy as she ‘works the Hill’ in my home-state of Washington. So of course I said YES! to her request for me to drive her to Olympia this past Tuesday to the annual Housing and Homelessness Advocacy Day. Since this was an official university work day for me, I did not participate in active lobbying efforts, but I did shadow and observe Nancy at work. I count this as a real (fun) continuing education day.

Here are a few photos and accompanying observations I made of the experience–in more or less the order of how they occurred:

Nancy ‘preaching the gospel’ of political advocacy in the rented-out Presbyterian church in Olympia, across from the State Capitol building.

During the morning breakout session on youth homelessness, I couldn’t resist taking this photo of an unlikely pairing of ‘opposites’–across the aisle sorts of people: a Catholic high school girl and a

self-proclaimed Punk Anarchist with blue hair, multiple body piercings (including the standard issue safety pin through the earlobe) young woman standing peacefully side-by-side in front of me in the packed room.

I ‘jumped legislative boundaries’ and stood on the Capitol steps at the rally with Washington State legislative district #43, also known as ‘the Fighting 43rd.’ Nancy, of course, is a real constituent of the 43rd District. I used to be until I 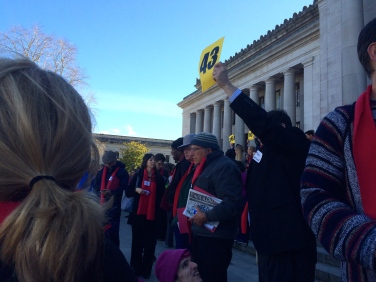 was gerrymandered out of it in the latest legislative redistricting. I still work in the 43rd and was there to shadow Nancy, so that’s the group I stuck with. It was a very colorful and vocal group. As we were all gathering on the steps, I was dismayed to overhear a conversation behind me negatively judging the much smaller group next to us representing ‘East Side’/Bellevue (home of gazzilionaire Bill Gates and the Microsoft groupies–and yes, I just ‘judged’ as well!). Direct quote: “Those people in Bellevue don’t understand or even see homelessness because they all live in gated communities.” Beware of the ‘those people’ statements. We are all prone to making them, but they are, of course, divisive and don’t really help build on advocacy and social justice causes. 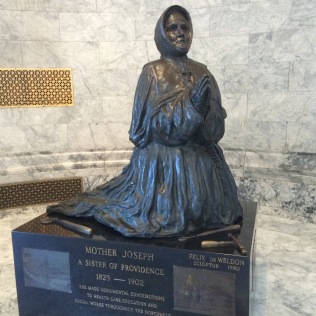 Greeting us just inside the main North Entrance doors to the State Capitol Building was this statue of a nurse, Mother Joseph, a Sister of Providence who was also an excellent architect and builder (hence the various tools scattered around her), founder of Seattle’s first hospital, the King County Poor Farm and Hospital that then split into Providence Hospital and King County/Harborview Hospital. I am fascinated by the intricacies and historical roots of our separation of Church and State, especially as it applies to health care.

I went with the Fighting 43rd–and Nancy Amidei–into the Democratic Caucus chamber to meet with the three elected officials for the district: Senator Jamie Pedersen, Representative and Speaker of the House Frank Chopp, and Representative Brady Walkinshaw. Senator Pedersen spoke of the political savviness of Frank Chopp, telling the story of years ago when the Washington State General Assistance (welfare) fund was on the chopping block. Representative Chopp helped to introduce and pass legislation renaming part of the ‘welfare fund’ the fund for the “Aged, Blind, and Disabled,” pointing out that anyone who voted against that was doomed to not being re-elected. I listened to several well-spoken and impassioned brief speeches by constituents of the 43rd in favor of various housing and homelessness legislation. Afterwards, Frank Chopp encouraged people to continue to speak up and tell their stories, saying “you’d be surprised how those individual stories can come back to us as we are deciding how to cast our votes.”

After this meeting Nancy wafted me off to the Governor’s office where we were greeted by–surprise!–not just a friendly guard, but also by this sign announcing that it was the site for the resident defibrillator. I find that fact fascinating and had to stop and take a photograph.

Finally, here is Nancy in the Governor’s office (next to his photograph), writing him a personal letter advocating for her specific housing and homelessness ‘asks.’ By then I was both exhilarated and exhausted and drove Nancy back to Seattle, talking advocacy the entire hour it took to get back. 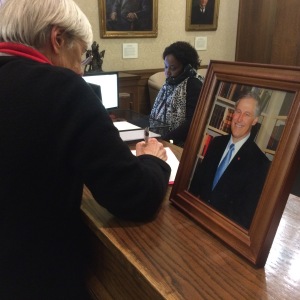 While I counted the advocacy day as a major event and was still spending time resting up and processing the day’s events, Nancy was spending the rest of her week back down in Olympia for several days, and here she is captured in a news photograph strolling through the U-District deep in conversation with Seattle mayor Ed Murray. I have concluded that I cannot keep up with Nancy but I am determined to keep learning more about politics and policy and advocacy from an advocacy great. 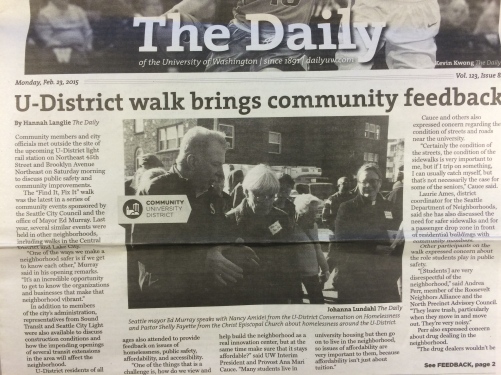 Amidst all the Year in Reviews and New Years Resolutions and post Christmas/Hanukkah/Kwanzaa/Festivus consumerism hangovers, I’m thinking a lot about the power of hope. The power of dreaming a better world. The power of dreaming and then doing something concrete to help bring about a better world. Direct service, political advocacy, and activism: we need a healthy combination of people involved in all three areas of civic engagement. And just because we might be drawn to one area (like direct service) and repelled by another (like in-your-face activism) doesn’t mean that they aren’t all equally as important.

Brought to you by the U.S. government (with the amusing tagline “Government made easy”) is the website page “Popular New Year’s Resolutions.”  They list thirteen resolutions with the first being the all too familiar ‘lose weight’ and the second being ‘volunteer to help others.’ The ‘volunteer to help others’ links to the Tumblr blog for the Corporation of National and Community Service, the federal agency responsible for national service programs like AmeriCorps and SeniorCorps. Continuing with the hope-inspiring web-surfing, I discover Tublr’s Year in Review 2014/top blog posts and sites. Under ‘activism’ I find some terrific blogs, including Seattle-based Citizenship and Social Justice, CultureStr/ke (arts and activism around immigration), Pioneering Justice (photojournalism on human rights issues), and 100 Days of Activism. There are also some amusing blogs, such as Cats Can’t Be Vegan, Idiots.

Art and writing as activism. The living writer who best exemplifies what it means to dream a better world (and to write great literature about it) is science-fiction writer Ursula Le Guin. This year at the National Book Awards, Le Guin received the Medal for Distinguished Contribution to American Letters. In her powerful acceptance speech (YouTube video of it here), she states:

“Hard times are coming, when we’ll be wanting the voices of writers who can see alternatives to how we live now, can see through our fear-stricken society and its obsessive technologies to other ways of being, and even imagine real grounds for hope. We’ll need writers who can remember freedom — poets, visionaries — realists of a larger reality”

For a good article related to her speech, read Bill Moyer’s article “Ursula Le Guin’s viral video: we will need writers who can remember freedom” 12-27-14. And for a link to the complete transcript/copy of her speech, Le Guin has it on her author website here.

Happy New Years. Resolve to dream (and write and create and serve and agitate) a better world.

A terrific training module/activity guide I use (in an adapted form) in my undergraduate community health course is the Bonner Foundation’s Bridging the Gap Between Service, Activism, and Politics.