Yesterday I attended the Nurse Lobby Day in Olympia, Washington, sponsored by the Washington State Nurses Association (WSNA). I was not impressed, and I was embarrassed for nursing. I have been to more than a few Washington State and national/Washington, DC lobby days and rallies for housing and homelessness. These have always been passionate, well organized, vocal, and focused in their political advocacy message. This is the first, and may well be my last nursing lobby day.

First, I should have heeded my own internal warnings when I looked up the WSNA state legislative priorities for this year. I am part of a grass-roots Seattle-area group called People for Public Health, led by one of my all-time favorite people, Nancy Amidei, a master of political advocacy. We advocate for public health programs and issues, trying to educate the public and our political officials about the importance of basic public health activities and programs. Last fall, Nancy asked me to look up the current legislative priority issues for WSNA, for the Alliance for Community Health Centers, and for the Washington State Public Health Association. The community health centers and the public health association had very visible and focused legislative priorities posted on their websites. Save Basic Health. Save Apple Health for Kids. Both important safety net health programs. WSNA on the other hand had wishy-washy ones buried deep within their website. In a time of unprecedented cuts to safety net health and social services in our state, the WSNA legislative priorities included a safe medication ‘take back’ program, and longer uninterrupted breaks for hospital nurses.

I have never been interested in joining the WSNA because they are mainly a collective bargaining unit for nurses, and because I can’t afford their yearly dues of close to $800. However, they are the only statewide nursing organization, so I decided to check out their lobby day. Their event was held in the Great Wolf Lodge, an indoor water-park theme park, casino sort of place 20 minutes south of our state capital of Olympia. I do not know why they held it there, and am still recovering from the strangeness of the décor. Tacky does not even come close to describing it. Beware. They are a chain and may be coming to a town near you.

There were pre-teens in bikinis running around the lobby and hallways, large plastic wolves made to look like wood-carvings, and treasure chests that lit up and made strange sounds when children touched them. And in the midst of that were 550 nurses and nursing students gathered in a large ballroom to watch and hear Governor Christine Gregoire give a speech.  She talked about how she is “dismantling my entire public career” in the choices she and the state legislature are having to make this year due to dire economic times. She also talked about how we shouldn’t waste the crisis and should use this as an opportunity to change the status quo and to move health care in Washington State into the 21st Century. She’s working with Kathleen Sebelius to have Washington be a pilot state for health care reform. Then she said, “I don’t get the federal repeal of health reform. Do we like the status quo? Do we think it’s working?” This received a very lukewarm reception from the audience. I noticed many people rolling their eyes or looking around nervously, not clapping as some seated up front were doing. She ended by reminding us of the statistics of nurses being the largest segment of the health care workforce and a group highly trusted by the public. “You use compassion, and you are also tough” she told the audience, and she encouraged people to get involved, go visit their legislators and tell them their stories of being nurses and to advocate for programs they were passionate about. 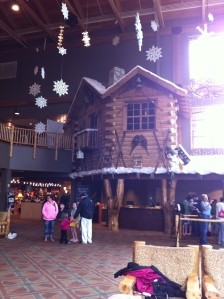 Following her speech there were breakout sessions on specific issues, and then a really bad unhealthy boxed lunch, during which Louise Kaplan, PhD, FNP spoke to us remotely from her home in Washington, DC. Dr. Kaplan is the Senior Policy Fellow at the American Nurses Association. The topic of her talk was health care reform and she started by saying that she used to begin by asking “is health care a right or a privilege?” but that nursing groups really couldn’t agree on this, so she stopped asking it.

That was it. No rally of nurses at the State Capitol Building, no consensus on any substantive legislative priorities. People dispersed, perhaps to the water slide or the Hungry Wolf Lounge for drinks—for an uninterrupted break. Yesterday I was ashamed to be a nurse.

One thought on “The Nurse Lobby Day That Wasn’t”